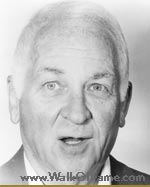 Excerpting from his entry on the :

A one-of-a-kind sportscaster in Los Angeles for 43 years, Jim died July 22, 1994, at age 70 from complications of liver cancer. He began at KMPC in 1950, fresh out of UCLA, writing for broadcaster Bob Kelley. Jim wrote for Bob for 11 years. He hosted “Here’s Healy” on KBIG and also worked at KFWB, KABC-TV and KLAC. Jim was the nightly sports reporter on KABC-TV/Channel 7. .”Is. it. true?” became one of his trademark lines. His headstone at Hollywood Hills Forest Lawn reads: “Jim Healy, 1923-94, IT IS TRUE.? . In 1997 he was inducted into the Southern California Sports Broadcasters Hall of Fame.

Healy’s shows took the form of him reading headlines, with the clicking sound effect of a teleprinter in the background. In response to his own headlines or comments, Healy would then play one of his many favorite audio clips, such as “That’s a bunch of bull,” “That’s just plain poppycock”, or “Jim Healy, you’ve got a weak show”. Among his sound effects was a silly laughtrack, sounding like, “Hee-hee-hee-hee.” .