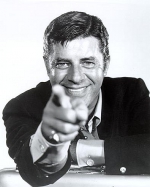 Jerry Lewis is an American comedian, actor, film producer, writer, film director and singer. He is best-known for his slapstick humor in stage, radio, screen, recording and television. He was originally paired up with Dean Martin in 1946, forming the comedy team of Martin and Lewis. In addition to the team's popular nightclub work, they starred in a successful series of comedy films for Paramount Pictures. As an innovative filmmaker, Lewis is credited with inventing the video assist system in cinematography. Lewis is also known for his charity fund-raising telethons and position as national chairman for the Muscular Dystrophy Association. Lewis has won several awards for lifetime achievements from The American Comedy Awards, The Golden Camera, Los Angeles Film Critics Association, and The Venice Film Festival, and he has two stars on the Hollywood Walk of Fame. In 2005, he received the Governors Award of the Academy of Television Arts & Sciences Board of Governors, which is the highest Emmy Award presented. On February 22, 2009, the Academy of Motion Picture Arts and Sciences awarded Lewis the Jean Hersholt Humanitarian Award.

He was born Jerome Levitch in Newark, New Jersey, to Russian Jewish parents. His father, Daniel Levitch, was a Master of Ceremonies and vaudeville entertainer who used the professional name Danny Lewis, His mother, Rachel Levitch, was a piano player for a radio station.

Lewis started performing at age five and would often perform alongside his parents in the Catskill Mountains in New York State. By fifteen had developed his "Record Act", in which he exaggeratedly mimed the lyrics to songs on a phonograph. He used the professional name Joey Lewis, but soon changed it Jerry Lewis to avoid confusion with comedian Joe E. Lewis and heavyweight boxing champion Joe Louis. He graduated from Irvington High School in Irvington, New Jersey.