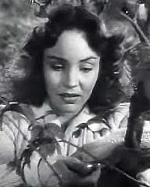 Phylis Lee Isley better known as her stage name Jennifer Jones, was an American actress. A five-time Academy Award nominee, Jones won the Academy Award for Best Actress for her performance in The Song of Bernadette. Jones was born in Tulsa, Oklahoma, the daughter of Flora Mae and Phillip Ross Isley. She was raised Roman Catholic and she attended Catholic school. Her parents toured the Midwest in a traveling tent show they owned and operated. Jones attended Monte Cassino Junior College in Tulsa and Northwestern University, where she was a member of Kappa Alpha Theta sorority before transferring to the American Academy of Dramatic Arts in New York City in 1938. It was here she met and fell in love with fellow acting student Robert Walker. The couple married on January 2, 1939.

They returned to Tulsa for a 13-week radio program arranged by her father, and then made their way to Hollywood. Isley landed two small roles, first in a 1939 John Wayne western titled New Frontier, followed by a serial entitled Dick Tracy’s G-Men. In these two films, she was billed as ‘Phyllis Isley’. However, she failed a screen test for Paramount Pictures and decided to return to New York City.

While Walker found steady work in radio programs, Isley worked part-time modeling hats for the Powers Agency while looking for possible acting jobs. When she learned of auditions for the lead role in Claudia, Rose Franken?s hit play, she presented herself to David O. Selznick?s New York office but fled in tears after what she thought was a bad reading. Selznick, however, overheard her audition and was impressed enough to have his secretary call her back. Following an interview, she was signed to a seven-year contract.