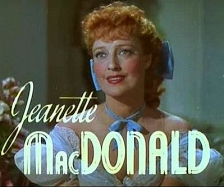 Jeanette MacDonald was an American singer and actress best remembered for her musical films of the 1930s with Maurice Chevalier and Nelson Eddy. During the 1930s and 1940s she starred in 29 feature films, four nominated for Best Picture Oscars, and recorded extensively, earning three gold records. She later appeared in grand opera, concerts, radio, and television. MacDonald was one of the most influential sopranos of the 20th century, introducing grand opera to movie-going audiences and inspiring a generation of singers.

Jeanette Anna MacDonald was born June 18, 1903 at her family’s Philadelphia home at 5123 Arch Street. She was the youngest of the three daughters of Daniel and Anna Wright MacDonald. At an early age, she graduated from tap dancing in front of the mirror to dancing lessons with Al White, and from imitating her mother’s opera records to singing lessons with Wassil Leps. She performed at church and school functions and began touring in kiddie shows. She was raised as a Christian Scientist.

In November 1919 MacDonald joined her older sister, Blossom, in New York and landed a job in the chorus of Ned Wayburn’s The Demi-Tasse Revue, a musical entertainment presented between films at the Capital Theatre on Broadway. In 1920 she appeared in two musicals, Jerome Kern’s Night Boat as a chorus replacement, and Irene on the road as the second female lead. In 1921 MacDonald played in Tangerine, as one of the “Six Wives.” In 1922 MacDonald was a featured singer in a Greenwich Village revue, Fantastic Fricassee. Good press notices brought her a role in The Magic Ring. MacDonald played the second female lead in this long-running musical which starred Mitzi Hajos. In 1925 MacDonald again had the second female lead opposite Queenie Smith in Tip Toes, a George Gershwin hit show. The following year found her still in a second female lead in Bubblin’ Over, a musical version of Brewster’s Millions. MacDonald finally landed the starring role in Yes, Yes, Yvette. Planned as a sequel to producer H.H. Frazee’s No, No, Nanette, the show toured extensively but failed to please the critics when it arrived on Broadway. MacDonald also played the lead in her next two plays: Sunny Days, her first show for producers Lee and J.J. Shubert, for which she received rave reviews, and Angela, which the critics panned. Her last play was Boom Boom, with her name above the title. While MacDonald was appearing in Angela, film star Richard Dix spotted her and had her screen-tested for his film Nothing but the Truth. The Shuberts wouldn?t let her out of her contract to appear in the film, which starred Dix and Helen Kane, the ?Boop-boop-a-doop girl?. In 1929, famed film director Ernst Lubitsch was looking through old screen tests of Broadway performers and spotted MacDonald. He cast her as the leading lady in his first sound film, The Love Parade, which starred the Continental sensation Maurice Chevalier.