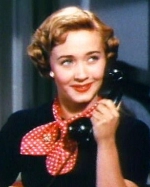 Jane Powell is an American singer, dancer and actress.

After rising to fame as a singer in her home state of Oregon, Powell was signed to Metro-Goldwyn-Mayer while still in her teens. Once there, the studio utilized her vocal, dancing and acting talents, casting her in such musicals as Royal Wedding, with Fred Astaire, A Date with Judy, with friend Elizabeth Taylor and Seven Brides for Seven Brothers, with Howard Keel. In the late 1950s, her film career slowed, only to be replaced with a busy theater and television career.

As of 2010, Powell lives with her fifth husband, former child star, Dickie Moore, in New York City and Connecticut, and is still active in television and theater.

The only child born to Paul E. Burce and Eileen Baker Burce in Portland, Oregon, Powell began dance lessons at the age of two. Powell was born a brunette, with straight hair. In an attempt to liken her appearance to Shirley Temple, Powell’s mother took her to get her first permanent the same year she began dance lessons. It wasn’t until she starred in Technicolor pictures that she became a blonde.