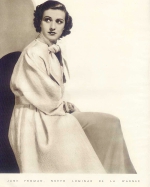 Jane Froman was an American singer and actress. During her thirty-year career, Froman performed on stage, radio and television despite chronic injuries that she sustained from a 1943 plane crash. The 1952 film, With a Song in My Heart, is based on her life.

Froman was born in University City, Missouri, the daughter of Elmer Ellsworth Froman and Anna T. Barcafer. Her childhood was spent in the small Missouri town of Clinton, and her adolescence and college years in the city of Columbia, which she considered her hometown. Her father left her mother when Jane was about 5 years old. She developed a stutter around this time, which plagued her all of her life, except when she sang.

Although she had classical voice training, early in her career she was drawn to the songs of the era’s songwriters, George and Ira Gershwin, Cole Porter, and Irving Berlin, who were inspiring a resurgence in popular music. She met vaudeville performer Don Ross when they auditioned for the same job at WLW radio station in Cincinnati. There, she joined Henry Thies’ orchestra and was featured vocal on a number of Thies’ Victor recordings. Convinced she was star material, Ross became her unofficial manager and persuaded her to move to Chicago where he worked for NBC radio. In 1933 Froman moved to New York City where she appeared on Chesterfield’s “Music that Satisfies” radio program with Bing Crosby. She married Don Ross in September 1933. She joined the Ziegfeld Follies the same year where she befriended Fannie Brice. In 1934, at age 27, she became the top-polled “girl singer.” The famous composer and producer, Billy Rose, when asked to name the top ten female singers, is reported to have replied, “Jane Froman and nine others.”

She is credited with three movies, Kissing Time, Stars Over Broadway and Radio City Revels. From 1952 to 1955, she hosted her own TV show The Jane Froman Show – initially called USA Canteen – on the CBS network. The show was 15 minutes long and initially alternated with The Perry Como Show. The very first hit song to be introduced on television, I Believe, was written for Froman by the show’s musicians, Ervin Drake, Irvin Graham, Jimmy Shirl, and Al Stillman and earned her a gold record in 1953.