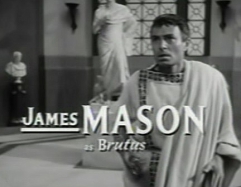 James Neville Mason was an English actor who attained stardom in both British and American films. Widely regarded as one of the finest film actors of the 20th century, Mason remained a powerful figure in the industry throughout his career and was nominated for three Academy Awards as well as three Golden Globes. Mason was born in Huddersfield, in the West Riding of Yorkshire, to John and Mabel Mason; his father was a wealthy merchant. Mason had no formal training as an actor and initially embarked upon it for fun. He was educated at Marlborough College, and earned a first in architecture at Peterhouse, Cambridge where he became involved in stock theatre companies in his spare time. After Cambridge he joined the Old Vic theatre in London under the guidance of Tyrone Guthrie and Alexander Korda, who gave Mason a small film role in 1933 but fired him a few days into shooting.

From 1935 to 1948 he starred in many British quota quickies. A conscientious objector during World War II, he became immensely popular for his brooding anti-heroes in the Gainsborough series of melodramas of the 1940s, including The Man in Grey and The Wicked Lady. He also starred with Deborah Kerr and Robert Newton in Hatter’s Castle. Mason starred in the critically acclaimed and immensely popular The Seventh Veil that set box office records in postwar Britain and raised him to international stardom. He followed it with a mortally wounded Irish revolutionary in Odd Man Out and Caught, his first Hollywood film.

Mason’s distinctive voice enabled him to play a menacing villain as greatly as his good looks assisted him as a leading man. His roles include Brutus in Julius Caesar, General Erwin Rommel in The Desert Fox: The Story of Rommel and The Desert Rats, the amoral valet turned spy in Joseph Mankiewicz’s 5 Fingers, the declining actor in the first remake of A Star Is Born, Captain Nemo in 20,000 Leagues Under the Sea, a small town school teacher driven insane by the effects of Cortisone in Bigger Than Life, a suave master spy in North by Northwest, a determined explorer in Journey to the Center of the Earth, Humbert Humbert in Stanley Kubrick’s Lolita, a hired assassin sent to kill Peter O’Toole’s character in Lord Jim, the vampire’s servant, Richard Straker, in Salem’s Lot, and a surreal pirate captain in Yellowbeard. One of his last roles, that of corrupt lawyer Ed Concannon in The Verdict, earned him his third and final Oscar nomination.