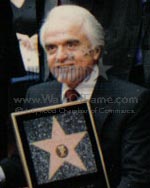 Jack Joseph Valenti was a long-time president of the Motion Picture Association of America. During his 38-year tenure in the MPAA, he created the MPAA film rating system, and he was generally regarded as one of the most influential pro-copyright lobbyists in the world.

Valenti was born in Houston, Texas, USA, on September 5, 1921, the son of Italian immigrants. During World War II, he was a lieutenant in the United States Army Air Corps, flew 51 combat missions as the pilot-commander of a B-25 attack bomber and received four decorations.

Valenti was an alumnus of the University of Houston where he was awarded a B.B.A. in 1946. He later received an M.B.A. from Harvard University. During his time at UH, Valenti worked on The Daily Cougar newspaper staff, and served as president of the university’s student government. Valenti would later serve on the university’s board of regents, and became the School of Communication’s namesake when it was renamed to the Jack J. Valenti School of Communication in April 2008. In 2002, the university also awarded him an honorary doctorate.

In 1952, he co-founded “Weekley & Valenti”, an advertising/political consulting agency.