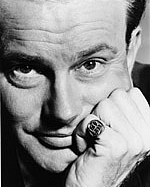 Jack Harold Paar was an American radio and television comedian and talk show host, best known for his stint as host of The Tonight Show.

Paar was born in Canton, Ohio, the son of Howard and Lillian M. Paar. He moved with his family to Jackson, Michigan, 30 miles south of Lansing, as a child. Paar left school at 16. He first worked near home as a radio announcer at WIBM in Jackson and later as a humorous disc jockey at Midwest stations, including WJR in Detroit, WIRE in Indianapolis, WGAR in Cleveland and WBEN in Buffalo. In his book P.S. Jack Paar, he recalled doing utility duty at WGAR on the night Orson Welles broadcast his famous War of the Worlds over the CBS network. Attempting to calm possible panicked listeners, Paar announced, “The world is not coming to an end. Trust me. When have I ever lied to you?”

Paar was drafted into the military in 1943 while in Buffalo hosting WBEN’s morning show “The Sun Greeters’ Club.” During World War II, as part of a special services company entertaining troops in the South Pacific, Paar was a clever, wisecracking master of ceremonies. More than once, his pointed jibes at officers nearly got him into trouble. After WWII, he came to the attention of RKO Radio Pictures, which hired him to emcee Variety Time, a compilation of vaudeville sketches. Paar later recalled that RKO didn’t know what to do with him. His producers, trying to decide what kind of screen characters he could play, compared Paar with other RKO stars. Finally, according to Paar, one of the executives had an inspiration, and figured out who Jack Paar really was: “Kay Kyser, with warmth.” Paar projected a pleasant personality on film, and RKO called him back to emcee another filmed vaudeville show, Footlight Varieties. Paar was featured in a few films, including a role opposite Marilyn Monroe in Love Nest. Like fellow humorists Steve Allen and Henry Morgan, Paar dabbled in motion pictures but was much more comfortable behind a studio microphone, broadcasting. He caught his biggest break when Jack Benny ? who’d been impressed with Paar while entertaining in Guadalcanal in 1945, and who’d taken the young humorist under his wing ? helped steer Paar toward performing on NBC as Benny’s 1947 summer replacement. Historian John Dunning, in On the Air: The Encyclopedia of Old-Time Radio, has written that Benny wanted to produce the Paar replacement show himself, but settled for letting his own writers serve as consultants to Paar’s writers.