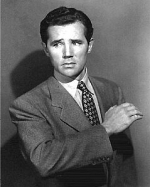 Howard Green Duff was an American actor of film, television, stage, and radio.

Duff was born in Charleston, Washington, now a part of Bremerton. He graduated from Roosevelt High School in Seattle in 1932 where he began acting in school plays only after he was cut from the basketball team. His first film role was as an inmate in Brute Force. His other movies include The Naked City, All My Sons, Calamity Jane and Sam Bass, Panic in the City, In Search of America, A Wedding and No Way Out. He appeared in a number of films with his first wife, actress/director Ida Lupino. One of Duff’s later performances was as Dustin Hoffman’s attorney in the Academy Award-winning Kramer vs. Kramer. On radio, Duff played Dashiell Hammett’s private eye Sam Spade from 1946?1950, starring in The Adventures of Sam Spade on three different networks – ABC, CBS and NBC. In 1951 Steve Dunne took over the role of Sam Spade. Duff also appeared in an episode of Climax! entitled Escape From Fear in 1955.