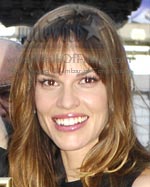 Hilary Ann Swank is an American actress. Her film career began with a small part in Buffy the Vampire Slayer and then a major part in The Next Karate Kid, where she played Julie Pierce, the first female protégé of sensei Mr. Miyagi. She has become known for her two Academy Award-winning performances: first as Brandon Teena, a transgender man in the movie Boys Don’t Cry, and a struggling waitress-turned-boxer, Maggie Fitzgerald, in Million Dollar Baby. Swank was born in Lincoln, Nebraska, the daughter of Judy Kay, a secretary and former dancer, and Stephen Michael Swank, who was an officer in the Air National Guard and later a traveling salesman. She has a brother, Daniel. Swank’s surname is of German origin. Her maternal grandmother was of Spanish and Shoshone Native American ancestry, and many of Swank’s family members hail from Ringgold County, Iowa. Swank came from humble beginnings, particularly as a child growing up in a trailer park near Lake Samish in Bellingham, Washington, to which she moved at age six, after having lived in Spokane, Washington. Swank has described her younger self as an “outsider” who felt that she belonged “only when a book or a movie, and could get involved with a character,” and was thus inspired to become an actress.

When Swank was nine years old, she made her first appearance on stage, starring in The Jungle Book. She became involved in school and community theater programs, including those of the Bellingham Theatre Guild, and attended Sehome High School in Bellingham until she was sixteen. Swank also competed in the Junior Olympics and the Washington state championships in swimming; she ranked fifth in the state in all-around gymnastics. Swank’s parents separated when she was thirteen, and her mother, supportive of her daughter’s desire to act, moved to Los Angeles, where they lived out of their car until Swank’s mother saved enough money to rent an apartment. Swank has described her mother as the inspiration for her acting career and her life. In California, Swank enrolled in South Pasadena High School and started acting professionally. She helped pay the rent with the money she earned appearing in television programs such as Evening Shade and Growing Pains.

Swank’s first leading film role was in The Next Karate Kid, which utilized her gymnastics background and paired her with Pat Morita. It was the fourth movie in the Karate Kid series. In September 1997, Swank was cast as single mother Carly Reynolds on Beverly Hills, 90210. She was initially promised it would be a two-year role, but saw her character written out after 16 episodes in January 1998. Swank later stated that she was devastated at being cut from the show, thinking, “If I’m not good enough for 90210, I’m not good enough for anything.”