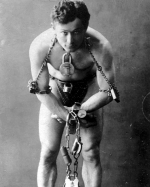 Harry Houdini was a Hungarian-American magician and escapologist, stunt performer, actor and film producer. He was also a skeptic who set out to expose frauds purporting to be supernatural phenomena.

Harry Houdini was born as Erik Ivan Weisz in Budapest, Austria-Hungary, on March 24, 1874. From 1907 on, however, Houdini would claim in interviews to have been born in Appleton, Wisconsin, on April 6, 1874.