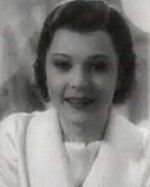 Harriet Nelson was an American singer and actress. Nelson is best known for her role on the long-running sitcom The Adventures of Ozzie and Harriet.

She was born Peggy Lou Snyder in Des Moines, Iowa to Roy Hilliard Snyder and Hazel Dell McNutt. By 1932, she was performing in vaudeville when she met the saxophone-playing bandleader Ozzie Nelson. Nelson hired her to sing with the band, under the name Harriet Hilliard. They married three years later.

Hilliard had a respectable film career as a solo performer, apart from the band. RKO Radio Pictures signed her to a one-year contract in 1936, and she appeared in three feature films, the most famous being the Fred Astaire-Ginger Rogers musical Follow the Fleet. She was very much in demand during the World War II years for leading roles in escapist musicals, comedies, and mysteries.

In Ozzie Nelson’s book, he wrote that Harriet was quite popular during the short time at RKO and they wanted her to continue her solo film career, but decided that it was more important for her to continue with the band and subsequent radio show.