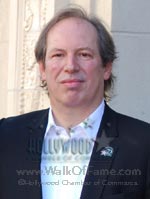 SPECIAL NOTE: Hans Zimmer dedicated his star on the Hollywood Walk of Fame to his longtime friend and publicist, Ronni Chasen

2,426th Star on the Hollywood Walk of Fame in the Category of Motion Pictures
at 6908 Hollywood Boulevard
on Wednesday, December 8, 2010

Hans Zimmer has scored more than 100 films, grossing approximately 13 billion dollars at the box office worldwide. He has been honored with an Academy Award®, two Golden Globes, and three Grammy’s. In 2003, the American Society of Composers, Authors, and Publishers presented him with the prestigious Henry Mancini award for Lifetime Achievement for his impressive and influential body of work. Hans has received a total 8 Golden Globe Nominations, 9 Grammy Nominations, and 8 Oscar® Nominations, the most recent for Sherlock Holmes. His other Oscar® nominations include Rain Man, Gladiator, The Lion King, As Good As It Gets, The Preacher’s Wife, The Thin Red Line, and The Prince of Egypt. He has also been honored with the prestigious Lifetime Achievement Award in Film Composition from the National Board of Review.

Hans’ interest in music began early, and after a move from Germany to the U.K., would lead to playing with and producing various bands, including The Buggles, whose “Video Killed the Radio Star” was the first music video to ever appear on MTV. But Hans was most interested in the world of film music. Not long after meeting established film composer Stanley Myers, the two founded the London-based Lillie Yard Recording Studios, collaborating on such films as My Beautiful Laundrette.

It was Hans’ solo work in 1988’s A World Apart, however, that gained the attention of director Barry Levinson, who then asked Hans to score Rain Man, Hans’ first American film. Levinson’s instinct was right – the score’s Oscar® nomination that followed would be the first of seven.

With Hans’ subsequent move to Hollywood, he expanded the range of genres of film music he explored, and his first venture into the world of animation, 1994’s The Lion King, brought Hans the Oscar®. The Lion King’s soundtrack has sold more than 15 million copies to date, and The Lion King Musical has garnered a Tony Award, and became Broadway’s ninth-longest-running show in history.

In the middle of Hans’ unparalleled pace of taking on new projects, his ability to innovate, to re-invent genres is what is perhaps most striking. The film scores Hans has written speak for themselves, whether it has been for drama in Barry Levinson’s Rain Man, action in Ridley Scott’s Black Rain, war in Terrence Malick’s The Thin Red Line, or the dark comic book world of Christopher Nolan’s The Dark Knight, for which he received another Grammy.

It was Hans’ unique take on the historical in Gladiator that earned him another Golden Globe. The album sold more than three million copies worldwide and spawned a second album “Gladiator: More Music from the Motion Picture.”

Hans’ roots in performing never left him, and in 2000, he performed his film music live for the first time in a concert at the 27th annual Flanders International Film Festival in Ghent, Belgium. With a 100-piece orchestra and 100-piece choir, he performed a number of newly- orchestrated concert versions of a selection of his work. The concert was recorded by Decca and released as a concert album entitled “The Wings of a Film: The Music of Hans Zimmer.”