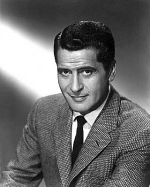 Hal March was a Jewish-American comedian and actor.

March first came to note as part of a comedy team with Bob Sweeney. The duo had their own radio show for a time and performed, in the early 1950s, as "Sweeney & March." He also partnered with actor/comic Tom d'Andrea in the early years of television.

Earlier in his television career, he appeared on such shows as Burns and Allen, The Imogene Coca Show and I Love Lucy. However, he was best known for being the host of The $64,000 Question, which he helmed from 1955 to 1958. In addition to his hosting duties, March also sung a version of the show's theme music in 1956, entitled "Love is the Sixty-Four Thousand Dollar Question."

As a result of the quiz show scandals, the show was canceled and, with the exception of a few film roles such as Hear Me Good and Send Me No Flowers, March was out of work for nearly a decade. 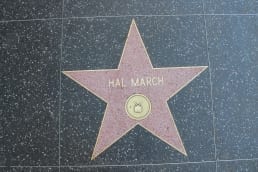