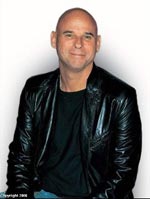 Guy Laliberté was born in Québec City in 1959. An accordionist, stilt-walker and fire-eater, he founded Quebec’s first internationally-renowned circus with the support of a small group of accomplices. A bold visionary, Guy Laliberté recognized and cultivated the talents of the street performers from the Fête foraine de Baie-Saint-Paul and created Cirque du Soleil in 1984.

Guy Laliberté was the first to orchestrate the marriage of cultures and artistic and acrobatic disciplines that is the hallmark of Cirque du Soleil. Since 1984, he has guided the creative team through the creation of every show and contributed to elevating the circus arts to the level of the great artistic disciplines. Cirque du Soleil currently has 20 unique productions presented worldwide touching 12 million spectators each year.

Laliberté brought a new show to Hollywood that will ran for 10 years. *IRIS A Journey through the World of Cinema,  a brand new major, resident production created exclusively for the Kodak Theatre at the Hollywood & Highland Center, home of the Academy Awards®. Cirque du Soleil has become an international organization, as much in terms of its makeup as in the scope of its activities and influence. Guy Laliberté now heads an organization with activities on five continents.

In October 2007, Guy Laliberté entered into a second lifetime commitment by creating the ONE DROP Foundation to fight poverty around the world by providing sustainable access to safe water. This new dream stems from the knowledge that the right to water is key to the survival of individuals and communities all over the world and from the values which have been at the heart of Cirque du Soleil since its inception: the belief that life gives back what you have given and even the smallest gesture will make a difference.

In September 2009, Guy Laliberté became the first Canadian private space explorer. His mission was dedicated to raising awareness on water issues facing humankind on planet earth. Under the theme Moving Stars and Earth for Water, this first Poetic Social Mission in space aimed at touching people through an artistic approach: a special 120-minute webcast program featuring various artistic performances unfolding in 14 cities on five continents, including the International Space Station.

Awards & Distinctions
Université Laval (Québec) awarded an honorary doctorate to Guy Laliberté in 2008. The year before, Guy Laliberté took the Ernst & Young Entrepreneur of the Year award for all three levels: Quebec, Canada and International. In 2004, he received the Order of Canada, the highest distinction in the country, from the Governor General of Canada. The same year, he was recognized by Time Magazine as one of the 100 Most Influential People in the world. In 2003, he was honored by the Condé Nast group as part of the Never Follow Program, a tribute to creators and innovators. In 2001, he was named a Great Montrealer by the Académie des Grands Montréalais. In 1997, Guy Laliberté received the Ordre National du Québec, the highest distinction awarded by the Government of Quebec.