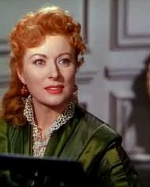 Greer Garson, CBE was a British-born actress who was very popular during World War II. As one of MGM’s major stars of the 1940s, Garson received seven Academy Award nominations, winning the Best Actress award for Mrs. Miniver. She was often cast in films with Walter Pidgeon as her co-star.

Greer Garson was born Eileen Evelyn Greer Garson in Manor Park, Essex, England in 1904. She was the only child of George Garson, a clerk born in London, but with Scottish lineage, and his Irish wife, Nancy Sophia Greer. Her maternal grandfather was David Greer, a RIC sergeant in Castlewellan, Co Down, Ireland in the 1880s and who later became a land steward to the Annesleys’ wealthy landlords, who built the town of Castlewellan. He lived in a large detached house built on the lower part of what was known as Pig Street or known locally as the Back Way near Shilliday?s builder?s yard. The house was called ?Claremount? and today the street is named Claremount Avenue. It was often reported that Garson was born in this house. She was, in fact born in London, but spent much of her childhood in Castlewellan.

She was educated at King’s College London, where she earned degrees in French and 18th century literature, and at the University of Grenoble in France. She had intended to become a teacher, but instead began working with an advertising agency, and appeared in local theatrical productions.

Greer Garson’s early professional appearances were on stage, starting at Birmingham Repertory Theatre in January 1932. She appeared on television during its earliest years, most notably starring in a thirty-minute production of an excerpt of Twelfth Night in May 1937, with Dorothy Black. These live transmissions were part of the BBC’s experimental service from Alexandra Palace and this is the first known instance of a Shakespeare play performed on television.