Gordon Hill Jenkins was an American arranger, composer and pianist who was an influential figure in popular music in the 1940s and 1950s, renowned for his lush string arrangements. Jenkins worked with the Andrews Sisters, Johnny Cash, The Weavers, Frank Sinatra, Louis Armstrong, Judy Garland, Nat King Cole, Billie Holiday, and Ella Fitzgerald, among other singers.

Jenkins was born in Webster Groves, Missouri. He started his career doing arrangements for a St Louis radio station. He was then hired by Isham Jones, the director of a dance band known for its ensemble playing, and this gave Jenkins the opportunity to develop his skills in melodic scoring. He also conducted The Show Is On on Broadway. Jenkins married high school sweetheart Nancy Harkey in 1931 and had three children: Gordon Jr., Susan, and Page. In 1946, he divorced Harkey and married Beverly Mahr, one of the singers in his band. They had a son, Bruce.

After the Jones band broke up in 1936, Jenkins worked as a freelance arranger and songwriter, contributing to sessions by Isham Jones, Paul Whiteman, Benny Goodman, Andre Kostelanetz, Lennie Hayton, and others. In 1938, Jenkins moved to Hollywood and worked for Paramount Pictures and NBC, and then became Dick Haymes' arranger for four years. In 1944, Jenkins had a hit song with "San Fernando Valley".

In 1945, Jenkins joined Decca Records. In 1947, he had his first million-seller with "Maybe You'll Be There" featuring vocalist Charles LaVere and in 1949 had a huge hit with Victor Young's film theme "My Foolish Heart", which was also a success for Billy Eckstine. At the same time, he regularly arranged for and conducted the orchestra for various Decca artists, including Dick Haymes, Ella Fitzgerald, Patty Andrews of the Andrews Sisters and Louis Armstrong . 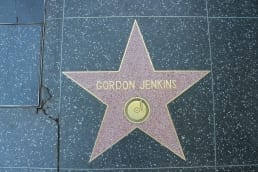