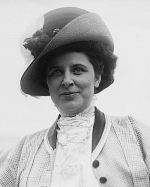 Geraldine Farrar was an American soprano opera singer and film actress. She had a large following among young women, who were nicknamed “Gerry-flappers”.

Farrar was born in Melrose, Massachusetts, the daughter of Sidney Farrar and his wife Henrietta Barnes. She studied voice in Boston, New York, Paris, and finally in Berlin, with famed soprano Lilli Lehmann. Farrar created a sensation in the German capital with her debut as Marguerite in Charles Gounod’s Faust in 1901. She appeared subsequently in the title rôles of Ambroise Thomas’ Mignon and Jules Massenet’s Manon, as well as Juliette in Gounod’s Roméo et Juliette. Her admirers in Berlin included Crown Prince Wilhelm of Germany, with whom she is believed to have had a relationship beginning in 1903.

After appearing at Monte Carlo, she made her debut at the New York Metropolitan Opera in Romeo et Juliette in 1906. She appeared in the first Met performance of Giacomo Puccini’s Madama Butterfly in 1907 and remained a member of the company until her retirement in 1922, singing 29 roles there in nearly 500 performances. She developed a great popular following, especially among New York’s young female opera-goers, who were known as “Gerry-flappers”. Farrar created the title roles in Pietro Mascagni’s Amica, Puccini’s Suor Angelica, and Umberto Giordano’s Madame Sans-Gêne as well as the Goosegirl in Engelbert Humperdinck’s Die Königskinder

She recorded extensively for the Victor Talking Machine Company and was often featured prominently in that firm’s advertisements. She also appeared in silent movies, which were filmed between opera seasons. Farrar starred in more than a dozen films from 1915 to 1920, including Cecil B. De Mille’s 1915 adaptation of Georges Bizet’s opera Carmen. One of her most notable screen roles was as Joan of Arc in the 1917 film Joan the Woman.