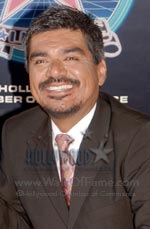 George Lopez is an American comedian, actor, and talk show host. He is mostly known for starring in his self-produced ABC sitcom George Lopez. His stand-up comedy examines race and ethnic relations, including his own Mexican American culture. He is currently the host of the late-night talk show Lopez Tonight on TBS.

Lopez, a Mexican-American, was born in Mission Hills, California. He was deserted by his father at birth, but was raised by his maternal grandmother, Benita Gutierrez, a factory worker, and step-grandfather Refugio Gutierrez, a construction worker. In 1993, Lopez married Ann Serrano. The couple has one child together, Mayan Lopez. A DNA test read by Mariah Carey on Lopez Tonight revealed Lopez to be of 55% European, 32% Native American, 9% East Asian, and 4% African descent.

Lopez has a genetic condition that caused his kidneys to deteriorate. His doctors had told him in April 2004 that he was going to require an organ transplant but he postponed the operation until after finishing the 4th season of George Lopez so as not to hurt the 170 people who worked on his show. In 2005, his wife Ann donated one of her kidneys to Lopez. The transplant was successful; Lopez lost 45