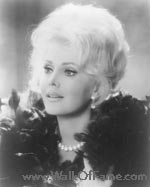 Eva Gabor was a Hungarian-born socialite and actress. She was best known for her role on Green Acres as Lisa Douglas, the wife of Eddie Albert's character, Oliver Wendell Douglas, and as a voice actor in three Walt Disney Pictures animated feature films The Aristocats, The Rescuers, and its sequel The Rescuers Down Under. Gabor had success as an actress in film, Broadway and television. Her elder sisters, Zsa Zsa Gabor and the late Magda Gabor, were also actresses and socialites.

Born as Éva Gábor in Budapest, the last daughter of Vilmos Gábor, a soldier, and Jolie Gábor. She was a Roman Catholic. Eva was the first Gabor sister to emigrate to the United States. She moved with her first husband, Swedish physician, Dr. Eric Drimmer. Her first movie role was a bit part in Forced Landing at Paramount Pictures. She acted in movies and on the stage throughout the 1950s. In 1965, she commenced her best known role in the TV sitcom Green Acres, a Paul Henning production in which she portrayed Lisa Douglas, the New York wife of Oliver Wendell Douglas played by Eddie Albert who left New York City to live on a farm. This was a hit show for six seasons, ending in 1971.

In later years, she did notable voice-over work for Disney movies, providing the European-accented voices of Duchess in The Aristocats, Miss Bianca in The Rescuers and The Rescuers Down Under, and the Queen of Time in the Sanrio film, Nutcracker Fantasy.

She was also a successful businesswoman marketing the "Eva Gabor Wigs" and "The Eva Gabor Look". 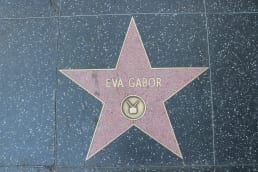