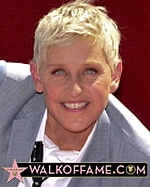 See the complete ceremony at the end of this page

The Hollywood Chamber of Commerce honored Ellen DeGeneres with a star on the Hollywood Walk of Fame today, Tuesday, September 4, 2012 at 11:30 a.m. at 6270 Hollywood Blvd., the famous corner of Hollywood and Vine.  Many fans congregated in front of the W Hotel Hollywood where the star was unveiled.

Beloved television icon and entertainment pioneer, Ellen DeGeneres’ distinctive comic voice has resonated with audiences from her first stand-up comedy appearances through her work today on television, in film and in the literary world.

Ellen DeGeneres has made a home for herself in the daytime arena with her hit syndicated talk show, “The Ellen DeGeneres Show.” The show enters its tenth season on September 10th. During its nine seasons, the show has earned a total of 38 Daytime Emmy® Awards. Additionally, DeGeneres has won 12 People’s Choice Awards and, most recently, the Teen Choice Award for “Choice Comedian” for a fourth consecutive year. Additionally, the show has won two Genesis Awards and a GLAAD Media Award for “Outstanding Talk Show Episode.” This October, DeGeneres will be presented with the 15th Annual Mark Twain Prize for American Humor by the John F. Kennedy Center for the Performing Arts.

DeGeneres, an accomplished best-selling author released her third book titled, Seriously…I’m Kidding, which includes a compilation of photos, quotes and stories from her life.  Her second book, The Funny Thing Is…., comprised of the author’s comedic short stories and essays hit the New York Times’ bestseller list upon its release. In 2005, DeGeneres was nominated for a Grammy Award for Best Comedy Album for the audio version of the book. Her first book, My Point…And I Do Have One, published in 1995, debuted at No. 1 on the New York Times bestseller list.

Both on and off screen, DeGeneres’ humanitarian efforts take center stage.  This past year, DeGeneres brought awareness to the anti-bullying issue by creating a PSA titled “Be Kind.”   In addition, DeGeneres showed her support for her hometown of New Orleans, devastated by Hurricane Katrina, by raising more than 10 million dollars to improve the lives of New Orleans residents.

DeGeneres also continues to share her love of animals and has brought attention to the Gentle Barn, an organization that rescues and rehabilitates animals.  Overall, “The Ellen DeGeneres Show” has raised more than 50 million dollars and brought attention to various causes, including global warming and breast cancer awareness. Additionally, DeGeneres served as spokesperson for General Mills’ breast cancer.

DeGeneres’ career began as an emcee at a local comedy club in her hometown of New Orleans, which led to national recognition in 1982 when her videotaped club performances won Showtime’s “Funniest Person In America” honor. When DeGeneres moved to Los Angeles she filmed her first HBO Special, “Young Comedians Reunion,” then in 1986 “Women of the Night.” That same year, DeGeneres became the first female comedian to be summoned by Johnny Carson to sit down with him after her performance.

DeGeneres began her acting career in television on Fox’s sitcom, “Open House.” She moved on to ABC’s “Laurie Hill,” prior to being offered a part on “These Friends of Mine” by ABC. After the first season, the show was renamed “Ellen.”  Running from 1994 to 1998, the show garnered record ratings, with DeGeneres receiving Emmy® nominations each season in the Best Actress category.  In 1997, DeGeneres was the recipient of the coveted Peabody Award as well as earning an Emmy® for writing the critically acclaimed “Puppy Episode” when her character came out as a gay woman to a record 46 million viewers.  DeGeneres followed with the CBS sitcom, “The Ellen Show,” which ran from 2001 to 2002.

In May 2010, DeGeneres announced eleveneleven, a record label created in partnership with Telepictures, which finds new acts and platforms them on the talk show with the first release of 12- year-old Internet singing sensation, Greyson Chance.

DeGeneres has become a sought after spokesperson who’s been featured in highly successful and popular campaigns including American Express, CoverGirl and JC Penney. 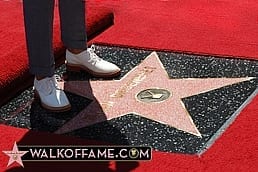