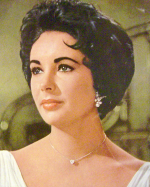 Dame Elizabeth Rosemond Taylor, DBE, also known as Liz Taylor, is an English-American actress. She is known for her acting talent and beauty, as well as her Hollywood lifestyle, including many marriages. Taylor is considered one of the great actresses of Hollywood’s golden age.

Taylor was born in Hampstead, a wealthy district of north-west London, the second child of Francis Lenn Taylor and Sara Viola Warmbrodt, who were Americans residing in England. Taylor’s older brother, Howard Taylor, was born in 1929. Both of her parents were originally from Arkansas City, Kansas. Her father was an art dealer and her mother a former actress whose stage name was ‘Sara Sothern’. Sothern retired from the stage when she and Francis Taylor married in 1926 in New York City. Taylor’s two first names are in honour of her paternal grandmother, Elizabeth Mary Taylor. A dual citizen of the UK and the U.S., she was born a British subject through her birth on British soil and an American citizen through her parents.

At the age of three, Taylor began taking ballet lessons with Vaccani. Shortly before the beginning of World War II, her parents decided to return to the United States to avoid hostilities. Her mother took the children first, arriving in New York in April 1939, while her father remained in London to wrap up matters in the art business, arriving in November. They settled in Los Angeles, California, where Sara’s family, the Warmbrodts, were then living.