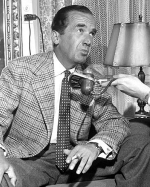 Edward Roscoe Murrow, KBE was an American broadcast journalist. He first came to prominence with a series of radio news broadcasts during World War II, which were followed by millions of listeners in the United States and Canada.

A pioneer of television news broadcasting, Murrow produced a series of TV news reports that helped lead to the censure of Senator Joseph McCarthy.

Murrow was born Egbert Roscoe Murrow near Greensboro, in Guilford County, North Carolina, the son of Roscoe C. Murrow and Ethel F. Murrow. His parents were Quakers. He was the youngest of three brothers and was a "mixture of English, Scots, Irish and German" descent. His home was a log cabin without electricity or plumbing, on a farm bringing in only a few hundred dollars a year from corn and hay. 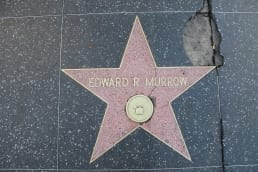