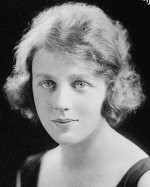 Edna Best was a British actress. Born Edna Hove in Hove, England. She was educated in Brighton and later studied dramatic acting under Miss Kate Rorke. Best was well known on the London stage before she entered films in 1921, having made her debut at Grand Theatre, Southampton in Charley’s Aunt in 1917. She also won a silver swimming cup as the lady swimming champion of Sussex.

She is best remembered for her role as the mother in the original 1934 film version of Alfred Hitchcock’s The Man Who Knew Too Much. Among her other film credits are , Swiss Family Robinson, The Late George Apley and The Ghost and Mrs. Muir and The Iron Curtain. She received a nomination for an Emmy Award in 1957 for her role in This Happy Breed. Best had appeared on television as early as 1938, in a production of the play Love from a Stranger, adapted from the Agatha Christie short story Philomel Cottage by Frank Vosper. The Wednesday afternoon broadcast was aired live, not recorded, and could be seen only in London due to the limitations of the nascent technology.

She was married to the actor Herbert Marshall from 1928 until 1940. They were the parents of the actress Sarah Marshall.