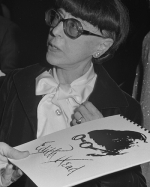 Edith Head was an American costume designer who had a long career in Hollywood that garnered eight Academy Awards?more than any other woman in history.

She was born Edith Claire Posener in Searchlight, Nevada, the daughter of Max Posener and Anna E. Levy. Her father was a mining engineer in the gold mine there. Whether her parents were married is unknown but, in 1901, her mother married Frank Spare and Edith was passed off as his child. Though her birth parents were Jewish, Head would claim to be a Catholic later in life.

She moved to San Bernardino, California at an early age. She received a BA in Spanish at the University of California, Berkeley, in 1918 and earned an MA in Romance Languages from Stanford University in 1920. She became a Languages teacher. Her first teaching position was at Bishop's School in La Jolla; but after one year she took a position teaching both Languages and Art at Hollywood School for Girls. To improve her drawing skills she took evening art classes at Chouinard Art College. On July 25, 1923, she married Charles Head, the brother of one of her Chouinard classmates, Betty Head. This marriage was short-lived, ultimately ending in divorce in 1936, after a number of years of separation, although she continued to be known professionally as Edith Head until her death.

In 1924, despite lacking art design or costume design experience, Head was hired as a costume sketch artist at Paramount Pictures in the costume department. Later Head admitted to borrowing another student's sketches for her job interview. She began designing costumes for silent films commencing with The Wanderer in 1925, and by the 1930s had established herself as one of Hollywood's leading costume designers. She worked at Paramount for 44 years until she went to Universal Pictures on March 27, 1967, possibly prompted by her extensive work for director Alfred Hitchcock, who had moved to Universal in 1960. 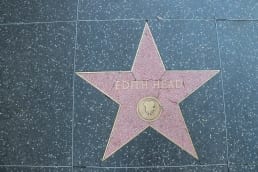