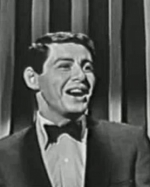 Edwin Jack “Eddie” Fisher was an American singer and entertainer, who was one of the world’s most famous and successful singers in the 1950s, selling millions of records and having his own TV show. He was married to Debbie Reynolds, Elizabeth Taylor, and Connie Stevens. His divorce from his first wife, Debbie Reynolds, to marry his best friend’s widow, Elizabeth Taylor, garnered scandalously unwelcome publicity at the time.

Fisher, fourth of seven children, was born in Philadelphia, Pennsylvania, the son of Russian-born Jewish immigrants Kate and Joseph Fisher. His father’s surname was originally Tisch or Fisch, but was anglicised to Fisher upon entry into the United States. To his family, Fisher was always called “Sonny Boy”, a nickname derived from the song of the same name in Al Jolson’s film The Singing Fool. Fisher attended Thomas Junior High School, South Philadelphia High School, and Simon Gratz High School. It was known at an early age that he had talent as a vocalist and he started singing in numerous amateur contests, which he usually won. He made his radio debut on WFIL, a local Philadelphia radio station. He also performed on Arthur Godfrey’s Talent Scouts, a popular radio show which later moved to TV. Because he became a local star, Fisher dropped out of high school in the middle of his senior year to pursue his career.

By 1946, Fisher was crooning with the bands of Buddy Morrow and Charlie Ventura. He was heard in 1949 by Eddie Cantor at Grossinger’s Resort in the Borscht Belt. After performing on Cantor’s radio show he was an instant hit and gained nationwide exposure. He then signed with RCA Victor.