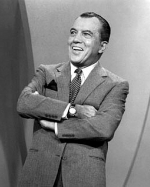 A former boxer, Sullivan began his media work as a newspaper sportswriter. When Walter Winchell, one of the original gossip columnists and the most powerful entertainment reporter of his day, left the newspaper for the Hearst syndicate, Sullivan took over as theatre columnist for The New York Graphic and later for The New York Daily News. His column, ‘Little Old New York’, concentrated on Broadway shows and gossip, as Winchell’s had and, like Winchell, he also did show business news broadcasts on radio. Again echoing Winchell, Sullivan took on yet another medium in 1933 by writing and starring in the film Mr. Broadway, which has him guiding the audience around New York nightspots to meet entertainers and celebrities. Sullivan soon became a powerful starmaker in the entertainment world himself, becoming one of Winchell’s main rivals, setting the El Morocco nightclub in New York as his unofficial headquarters against Winchell’s seat of power at the nearby Stork Club. Sullivan continued writing for The News throughout his broadcasting career and his popularity long outlived that of Winchell.

In 1948, the CBS network hired Sullivan to do a weekly Sunday night TV variety show, Toast of the Town, which later became The Ed Sullivan Show. Debuting in June 1948, the show was broadcast from CBS Studio 50, at 1697 Broadway in New York City, which in 1967 was renamed the Ed Sullivan Theater. Television critics gave the new show and its host poor reviews. Harriet Van Horne alleged that “he got where he is not by having a personality, but by having no personality.” Sullivan had little acting ability; in 1967, 20 years after his show’s debut, Time magazine asked “What exactly is Ed Sullivan’s talent?” His mannerisms on camera were so awkward that some viewers believed the host suffered from Bell’s palsy. Time in 1955 stated that Sullivan resembled