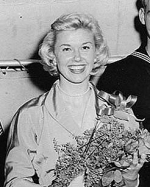 Doris Day is an American actress and singer, and has been an outspoken animal rights activist since her retirement from show business. Day’s entertainment career began in her late teens as a big band singer. In 1945 she had her first hit recording, “Sentimental Journey”, and, in 1948, appeared in her first film, Romance on the High Seas. During her entertainment career, she has appeared in thirty-nine films, recorded more than six-hundred-fifty songs, received an Academy Award nomination, won a Golden Globe and a Grammy Award, and, in 1989, received the Cecil B. DeMille Award for lifetime achievement in motion pictures.

As of 2009, Day was the top-ranking female box office star of all time and ranked sixth among the top ten box office performers. Doris Day was born in the Cincinnati, Ohio, neighborhood of Evanston to Alma Sophia Welz and Wilhelm Kappelhoff. All of her grandparents were German immigrants. Although the 1930 census lists her at age 7, she states to her biographer in “Doris Day: Her Own Story” that she was born in 1924. Specifically she states, ” named by my mother in honor of her favorite actress, Doris Kenyon, a silent screen star of that year 1924.” The youngest of three children, she had two brothers: Richard, who died before she was born, and Paul, a few years older.

Her parents’ marriage failed due to her father’s reported infidelity. Although the family was Roman Catholic, her parents divorced. After her second marriage, Day herself would become a Christian Scientist. Day was married four times.