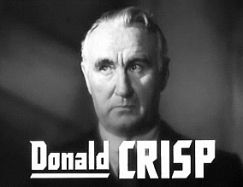 Donald Crisp was an English film actor. He was also an early motion picture producer, director and screenwriter. He won an Academy Award for Best Supporting Actor in 1942 for his performance in How Green Was My Valley.

Donald Crisp was born as George William Crisp in Bow, London, England, at the family home in Bow on July 27, 1882. Some sources say he was born in Aberfeldy, Perthshire, Scotland in 1880, but U.S. Census records indicate the London birthplace and date are correct. He was one of eight children born to James and Elizabeth Crisp. He was educated at the University of Oxford and allegedly at Eton College, though the Eton archivist denies this.

Crisp, who always claimed to be of Scottish descent, served as a trooper in the 10th Hussars in the Boer War. This experience, among other things, allowed him to cross paths with a young Winston Churchill just at the start of Churchill’s long political career. According to family memories, Crisp’s brother-in-law James Needham provided him with the fare to travel to America in 1906.

While traveling on the ship to America in 1906, Crisp’s singing talents during a ship’s concert caught the attention of opera impresario John C. Fisher, who immediately offered him a job with his company. He spent his first year in New York in Grand Opera and the following year as a stage director. It was while touring with the company in the United States and Cuba that Crisp first became interested in pursuing a career in the theatre. By 1910, Crisp, now using the name Donald, was working as a stage manager for the renowned entertainer, composer, playwright, and director George M. Cohan. It was during this time he met and befriended film director D. W. Griffith. When Griffith ventured west, to seek his fortune in Hollywood in 1912, Crisp accompanied him.