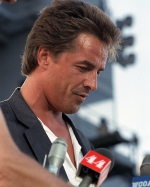 Donald Wayne “Don” Johnson is an American actor known for his work in television and film. He played the lead role of Sonny Crockett in the 1980s TV cop series, Miami Vice, which led him to huge success and fame. He also played the lead role in the 1990s cop series, Nash Bridges. Johnson is a Golden Globe winning actor for his role in Miami Vice, a winner of the APBA Offshore World Cup, and has received a star on the Hollywood Walk of Fame. He is also a singer, songwriter, producer, and director.

Johnson was born in Flat Creek, Missouri. His father, Wayne, was a farmer, and his mother, Nell, was a beautician; they were 19 and 17 at the time of his birth, respectively. At age six, he moved from Missouri to Wichita, Kansas. A 1967 graduate of South High School, he was involved in the high school’s theatre program. As a senior, he played the lead role of Tony in “West Side Story.” His biography noted that he had previously appeared in “Burnt Cork and Melody” and “The Hullabaloo.” He also attended the University of Kansas in Lawrence, Kansas.

In the late 1960s, Johnson was in a psychedelic rock band called Horses. Also in the band were future members of the band Kingfish, which featured Grateful Dead guitarist Bob Weir. The band put out one self-titled record on the White Whale label in 1969, later re-issued on the Gear Fab label in 2004 and then on the Rev-Ola label in 2005. Johnson, as several noteworthy news sources have mentioned over the years, was relieved of his military obligation due to a high lottery number. In a 1970 newspaper article, Johnson claimed he would not have done so even if called due to his beliefs at the time.

Johnson is quoted in a 1970 newspaper article, mentioning his draft-exempt status and his dislike for war.