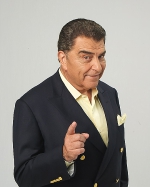 “Don Francisco” was born to Erick Kreutzberger and Anna Blumenfeld Neufeld, German-Jewish immigrants who fled to Chile to escape Nazi persecution. As a youth, he traveled to New York to study to be a tailor, but he spent most of the time watching TV. Back in Chile, where TV was just beginning, “Don Francisco” started a TV show in 1962, and he named it Sábados Gigantes. In it, he adapted many of the formulas he had seen in American TV to the Chilean public. The show became an instant hit that has lasted over 40 years. In 1986, the show began to be produced in Miami, Florida, with the same formula used in Chile, with the slightly different name of Sábado Gigante. “Don Francisco” immediately became a household name among Hispanic families across the United States, and in the following six years Kreutzberger developed a three hour long variety show, including contests, comedy, interviews and a traveling camera section. The traveling camera, or Cámara Viajera, has taken “Don Francisco” to over 185 countries worldwide, many of them more than once.

Kreutzberger in his show has interviewed many celebrities, including Roberto Durán, Cristina Saralegui, Sussan Taunton, Charytín and many others. In addition, his show has launched the careers of famous entertainers, such as Sissi and numerous more.

In September 1991, Kreutzberger introduced a new show on Wednesday at 10 pm on Univision called “Noches de Gigantes”. It ran until September 1992.