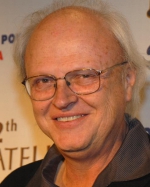 Dennis Muren, A.S.C. is an American film special effects artist, most notable for his work on the films of Steven Spielberg, James Cameron and George Lucas. He has won six Oscars for Best Visual Effects.

Muren was born in Glendale, California, the son of Charline Louise and Elmer Ernest Muren. He developed an interest in film-making and special effects from an early age. While studying business at Pasadena City College, Muren spent $6500 to make Equinox, a short science fiction film. Tonylyn Productions, a small film company, liked the film enough to distribute it. Tonylyn hired film editor Jack Woods to direct additional footage in order to make Equinox into a feature-length movie. When the feature-length Equinox was released in October 1970, Muren was credited as a producer in spite of having directed much of the film and creating the special effects himself. Despite mixed to poor reviews the movie made enough money for Muren to recoup his $8000 investment, and in the years since it has become a minor cult classic.

After earning his associate’s degree, Muren began working as a visual effects artist full-time. In 1976, Muren was hired at Industrial Light & Magic, then an upstart visual effects studio founded by little-known director George Lucas. Lucas and ILM’s first film, Star Wars, was released in 1977 to wide critical and public acclaim and was the highest grossing film of all time up until that point.