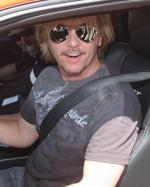 David Wayne Spade is an American actor, comedian and television personality who first became famous in the 1990s as a cast member on Saturday Night Live, and from 1997 until 2003 starred as Dennis Finch on Just Shoot Me!. He also starred as C.J. Barnes, along with Katey Sagal, James Garner and Kaley Cuoco on 8 Simple Rules.

He currently stars as Russell Dunbar on the CBS sitcom Rules of Engagement. He is also working with TBS on an animated series based on his film Joe Dirt.

Spade was born in Birmingham, Michigan, the son of Judith M, a writer and magazine editor and Wayne M. Spade, a sales representative. His brothers are Bryan and Andy Spade; Andy Spade is the husband of designer Kate Spade and CEO of Kate Spade New York.

Spade attended Scottsdale Community College and briefly went on to Arizona State University, where he was a member of the Sigma Alpha Epsilon fraternity. Spade performed standup at the university’s long-running sketch comedy show, Farce Side Comedy Hour, on numerous occasions. In the mid-80’s he also did standup in the Monday night comedy show at Greesy Tony’s Pizza in Tempe, Arizona. Before finding success as a comedian, Spade made money by working as a busboy, a valet parker, a skee ball championship competitor and a skateboard shop employee.