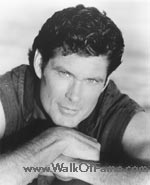 David Michael Hasselhoff, nicknamed “The Hoff,” is an American actor, singer, producer and businessman. He is best known for his lead roles as Michael Knight in the popular 1980s U.S. series Knight Rider and as L.A. County Lifeguard Mitch Buchannon in the series Baywatch. Hasselhoff also produced Baywatch for a number of seasons in the 1990s up until 2001, when the series ended with Baywatch Hawaii. Hasselhoff also crossed over to a music career during the end of the 1980s and the early 1990s. He was noted for his performance at the Berlin Wall in 1989; he enjoyed a short lived success as a singer primarily in German-speaking Europe. More recently, Hasselhoff has been involved with talent shows such as NBC’s America’s Got Talent from 2006-2009. Hasselhoff was the first celebrity eliminated from eleventh season of Dancing with the Stars, on September 21, 2010.

Hasselhoff portrayed Dr. William “Snapper” Foster, Jr. on the soap opera The Young and the Restless from 1975 to 1982. In 1979, he played the role of Simon in Starcrash. He launched his singing career with guest appearances on the first season of children’s program Kids Incorporated, performing ‘Do You Love Me.’ He guest starred on an episode of Diff’rent Strokes as himself in 1984.

Hasselhoff then starred in the science-fiction series Knight Rider from 1982 to 1986. He has described Knight Rider as more than a TV show: “It’s a phenomenon. It’s bigger than Baywatch ever was.” On the success of Knight Rider ? “It’s because it was about saving lives, not taking lives, and it was how one man really can make a difference. And we had a blast making it, and we made sure nobody died on the show; we made sure nobody ever drowned on Baywatch.”. He describes the acting he has done as “a little more difficult than if you had a regularly well-written script ? like, if I was going to be in, say, Reservoir Dogs, or The Godfather, or Dances with Wolves or Lawrence of Arabia or ER, I had to talk to a car.”

While his star rose, fell and rose again in the US, Hasselhoff’s popularity remained a little longer in Europe during the end of the 80s. Hasselhoff had two number-one hits in the German pop charts in 1989, the first of which very much resonated with the fall of the Berlin Wall at that time. In 1988, David trained with Patsy Swayze at Debby Reynolds Studio in North Hollywood, California for his Austrian segment of his Knight Rider tour.