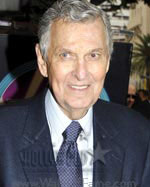 During his long career, he was president of the television division of three major studios: 20th Century Fox, Columbia Pictures, and MGM.

A graduate of the University of the Pacific, his numerous contributions to the TV industry have earned him a star on the Hollywood Walk of Fame. Until his death on January 2, 2010, he was married to actress Laraine Stephens, who appeared in his production, Power.