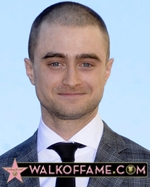 Daniel Radcliffe Honored With Star On The Hollywood Walk Of Fame

Watch the complete star ceremony below.

Helping emcee and Hollywood Chamber President/CEO Leron Gubler to unveil the star will be Chris Columbus and Chris Hardwick.

Daniel Radcliffe was born in London, England and began his career at age nine as the young David Copperfield in the BBC/PBS presentation of the classic Charles Dickens novel.

Radcliffe’s current film is the 20th Century Fox thrilling adventure “Victor Frankenstein” which will be released worldwide on November 25th. His next feature is “Now You See Me: The Second Act” in June 2016 for Lionsgate. This year he wrapped two independent films, “Swiss Army Man” and “Imperium.” He was most recently seen in the BBC telefilm “The Gamechangers.” In 2014, he starred in the horror-thriller “Horns,” and the romantic comedy “What If.” His other films include Sony Pictures Classics’ “Kill Your Darlings,” He starred last year as Billy in  Martin McDonagh’s comic masterpiece “The Cripple of Inishmaan.” The play made its way to Broadway from London’s West End, where it debuted in 2013.

Since completing the final installment in the series of eight “Harry Potter” films in 2010, Radcliffe has become a diverse and acclaimed talent. In 2011, he starred in a ten-month sell-out run of the Broadway musical “How to Succeed in Business Without Really Trying.” In 2012, Radcliffe starred in “The Woman in Black,” which has become the most successful British horror film of all time. In 2013, Ovation aired Radcliffe’s four-part TV mini-series, “A Young Doctor’s Notebook,” a wildly original comedy drama based on a collection of short stories by celebrated Russian author Mikhail Bulgakov. Radcliffe portrayed the younger doctor, who has exchanges with his older self, played by Jon Hamm. Season two aired in 2014.

In 2012, Radcliffe hosted “Saturday Night Live” and was voted “Entertainer of the Year” by Entertainment Weekly, as the most talented and original performer of 2011. He also won two Teen Choice Awards and a Scream Award, as well as two nominations for the People’s Choice Award for Favorite Movie Actor and Favorite Movie Star Under 25.

Radcliffe starred as Alan Strang, in both the 2007 West End and 2008 Broadway productions of Peter Shaffer’s “Equus,” winning the award for Best Leading Actor at the Annual Theatre Fan Choice Awards, organized by Broadway World, as well as Best Leading Actor and Breakthrough Performance Awards at the Broadway.com Audience Awards. He also garnered Drama League and Drama Desk nominations for his performance in the play. The London and Broadway productions of “Equus” were directed by Thea Sharrock and also starred Richard Griffiths.

A lifelong fan of “The Simpsons,” Radcliffe has lent his voice twice to the show. First, to the character of a brooding vampire named Edmund for the show’s “Treehouse of Horror XXI” special, entitled “Tweenlight,” which aired in 2010. He then voiced the character Diggs, a new transfer student whom Bart befriends. Previously, Radcliffe made a guest appearance as himself in the award-winning HBO/BBC series “Extras” starring Ricky Gervais. He recently lent his voice to “Robot Chicken” and “BoJack Horseman.”

Radcliffe is a spokesperson for The Trevor Project which awarded him the Trevor Hero Award. He recorded several PSAs and met with their volunteers and participated in training with the Trevor Youth Advisory Council. He is actively vocal about equality and suicide prevention in LGBT youth.