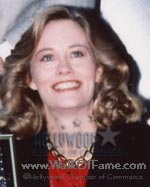 Cybill Lynne Shepherd is an American actress and former model. Her best known roles include starring as Jacy in The Last Picture Show, Maddie Hayes on Moonlighting, as Cybill Sheridan on Cybill, as Betsy in Taxi Driver and as Phyllis Kroll on The L Word.

Shepherd was born in Memphis, Tennessee, the daughter of Patty, a homemaker, and William Jennings Shepherd, who managed a home appliance business. Named after her grandfather Cy and her father Bill, Shepherd won the 1966 “Miss Teenage Memphis” contest at age 16, and the 1968 “Model of the Year” contest at age 18, making her a fashion star of the 1960s, resulting in fashion modeling work through high school and after.

According to Shepherd’s autobiography, it was a 1970 Glamour magazine cover that caught the eye of film director Peter Bogdanovich. His then-wife Polly Platt, however, claimed that it was she who upon seeing the cover in a check-out line in a Ralphs grocery store in southern California, said “That’s Jacy”, referring to the role Bogdanovich was casting &mdash; and ultimately offered to Shepherd &mdash; in The Last Picture Show. Shepherd was cast opposite Charles Grodin in The Heartbreak Kid. She played Kelly, the beautiful, sunkissed young woman whom Grodin’s character falls for while on his honeymoon in Miami. Directed by Elaine May, it was a critical and box office hit.