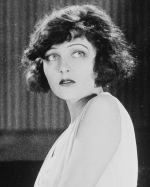 Corinne Griffith was an American actress. Dubbed “The Orchid Lady of the Screen”, she was one of the most popular film actresses of the 1920s and widely considered the most beautiful actress of the silent screen. Shortly after the advent of sound film, Griffith retired from acting and became a successful author.

Corinne Griffith was born as Corinne Mae Griffin in Texarkana, Texas to John Lewis Griffin and Ambolina Ghio on November 21, 1894. Her parents were married on July 6, 1887 in Texarkana according to their wedding announcement listed in the Dallas Morning News. Her grandparents, Anthony and Augusta Ghio, were born in Italy, and she had an older sister named Augusta. Although Griffith’s actual date of birth is widely disputed with conflicting information throughout her career, 1894 is her actual birth year according to the 1900 and 1910 Censuses. She attended Sacred Heart Convent school in New Orleans and worked as a dancer before she began her acting career. A November 20, 1915 newspaper article from the Dallas Morning News states that Corinne Griffin is going to use “Corinne Griffith” as her stage name, and that her grandfather, Anthony L. Ghio, was a wealthy former three-time mayor of Texarkana. Griffith began her screen career at the Vitagraph Studios in 1916. She later moved to First National, where she became one of their most popular stars. In 1929, Griffith received an Academy Award nomination for her role in The Divine Lady.

Griffith’s first sound film, Lilies of the Field was released in 1930. Griffith’s voice did not record well, and the film was a box office flop. After appearing in one more motion picture, the British film Lily Christine in 1932, she retired from acting. She returned to the screen in 1962 in the a low-budget melodrama Paradise Alley, which received scant release.

Corinne Griffith was one of the few film stars to move successfully into new careers once her stardom had ended. She was an accomplished writer who published eleven books including two best sellers, My Life with The Redskins and the memoir Papa’s Delicate Condition, which was made into a 1963 film starring Jackie Gleason about the Ghio and Griffin family. Her actual family names were used in the film. Her ventures into real estate were particularly successful and she was one of the major forces in Republican politics in California for decades.