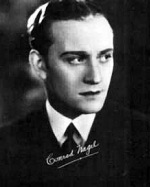 Conrad Nagel was an American screen actor and matinee idol of the silent film era and beyond. He was also a well-known television actor and radio performer.

Born in Keokuk, Iowa, into an upper-middle-class family, he was the son of a musician father, Frank, and a mother, Frances, who was a locally praised singer. Nagel?s mother died early in his life, and he always attributed his artistic inclination to growing up in a family environment that encouraged self-expression. His father, Frank, became dean of the music conservatory at Highland Park College and when Nagel was three, the family moved to Des Moines.

After graduating from Highland Park College at Des Moines, Iowa, Nagel left for California to pursue a career in the relatively new medium of motion pictures where he garnered instant attention from the Hollywood studio executives. With his frame, blue eyes, and wavy blond hair; the young, Midwestern Nagel was seen by studio executives as a potentially wholesome matinee idol whose unpretentious all-American charm would surely appeal to the nation’s nascent film-goers.

Nagel was immediately cast in film roles that cemented his unspoiled lover image. His first film was the 1918 retelling of the Louisa May Alcott classic, Little Women, which quickly captured the public?s attention and set Nagel on a path to silent film stardom. His breakout role came in the 1920 film, The Fighting Chance, opposite Swedish starlet Anna Q. Nilsson.