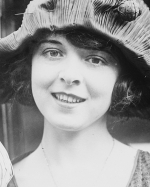 Colleen Moore was an American film actress, and one of the most fashionable stars of the silent film era.

Born Kathleen Morrison on August 19, 1899 in Port Huron, Michigan, Miss Moore was the eldest child of Charles R. and Agnes Morrison. The family remained in Port Huron during the early years of Moore’s life, at first living with her grandmother Mary Kelly and then with at least one of Moore’s aunts.

By 1905 the family had moved to Hillsdale, Michigan where they remained for over two years. They had relocated to Atlanta, Georgia by 1908. They are listed at three different addresses during their stay in Atlanta : 301 Capitol Avenue ?1908; 41 Linden Avenue ? 1909; 240 N. Jackson Street ? 1910. They then lived briefly?probably less than a year?in Warren, Pennsylvania, and by 1911 they had settled down in Tampa, Florida.

Two great passions of young Moore’s were dolls and movies; each would play a great role in her later life. She and her brother began their own stock company, reputedly performing on a stage created from a piano packing crate. She admired the faces she saw on the silver screen and on magazine covers. She had resolved at a young age that she would be not only an actress, but a star. Her aunts, who doted on her, indulged her other great passion and often bought her miniature furniture on their many trips, with which she furnished the first of a succession of doll houses.