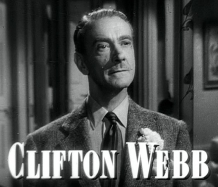 Clifton Webb was an American actor, dancer and singer.

Webb was born Webb Parmelee Hollenbeck in a rural part of Marion County, Indiana, which would, in 1906, become Beech Grove, a self-governing city entirely surrounded by Indianapolis. As a result, virtually all printed sources give the larger city as his place of birth. Webb’s parents were Jacob Grant Hollenbeck, the son of a grocer from a multi-generational Indiana farming family, and Mabelle A. Parmelee, the daughter of a railroad conductor.

In 1892, Webb’s formidable mother, Mabelle, moved to New York City with her beloved “little Webb”, as she called him for the remainder of her life. She dismissed questions about her husband Jacob, a ticket clerk who, like her father, worked for the Indianapolis-St. Louis Railroad, by saying, “We never speak of him. He didn’t care for the theatre.”

Privately tutored, Webb started taking dance and acting lessons at the age of five. He made his stage debut at seven in the impressive setting of Carnegie Hall by performing with the New York Children’s Theatre in Palmer Cox’s The Brownies. This success was followed by a vaudeville tour playing The Master of Charlton Hall, succeeded by leading roles as Oliver Twist and Tom Sawyer in The Adventures of Huckleberry Finn. In between performances, Mabelle saw to it that he studied painting with the renowned Robert Henri and voice with the equally famous Victor Maurel. By his seventeenth birthday, he was singing one of the secondary leads in the Boston-based Aborn Opera Company’s production of the comic opera Mignon.