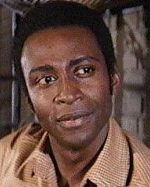 Cleavon Jake Little was an American film and theatre actor, known for his lead role as Bart in the 1974 Mel Brooks comedy Blazing Saddles and as the irreverent Dr. Jerry Noland in the early 1970s sitcom Temperatures Rising. In 1978 he played “The Prince of Darkness” in the radio station comedy FM. He was also in the 1984 action film Toy Soldiers and acted out the role of Super Soul in the film Vanishing Point in 1971.

Little was born in Chickasha, Oklahoma and was the brother of singer DeEtta Little, best known for her performance of Gonna Fly Now, the main theme to Rocky. He grew up in California and attended college initially at San Diego City College, and then at San Diego State University where he earned a bachelor’s degree in dramatic arts.

After receiving a full scholarship to graduate school Juilliard he moved to New York. After completing studies at Juilliard, Little trained at the American Academy of Dramatic Arts.

Little made his professional debut in February 1967, appearing Off-Broadway at The Village Gate as the Muslim Witch in the original production of Barbara Garson’s MacBird. This was followed by the role of Foxtrot in the original production of Bruce Jay Friedman’s long running play Scuba Duba which premiered in October 1967. The following year, he made his first film appearance in a small uncredited role in What’s So Bad About Feeling Good?, and his first television appearance as a guest star on two episodes of Felony Squad. A series of small roles in films followed in films like John and Mary and Cotton Comes to Harlem .