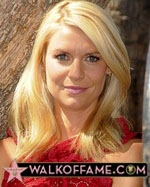 Watch Claire Danes unveil the Star on the Walk of Fame below.

The Hollywood Chamber of Commerce proudly honored award-winning actress Claire Danes with the 2,559th star on the Hollywood Walk of Fame on Thursday, September 24th, 2015. The star in the category of Television was appropriately dedicated at in front of The White House Café.

Claire Danes is a native of Manhattan, New York, the daughter of a sculptor and printmaking artist, Carla Danes and a photographer Christopher Danes. She started studying dance when she was six years old and took dance classes at Dance Theater Workshop and acting classes at the Lee Strasberg Theatre and Film Institute at the age of ten. She first caught critics’ and audiences’ attention in Ed Zwick and Marshall Hershkovitz’s acclaimed series, “My So Called Life,” which earned her an Emmy nomination, and she was awarded the Golden Globe for her leading role as Angela Chase.

She has established herself as one of Hollywood’s leading actresses and is currently starring on Showtime’s critically-acclaimed series Homeland. For her performance as Carrie Mathison, she has won back to back Emmy and Golden Globe Awards for “Best Performance by an Actress in a Television Series – Drama,”anda 2013SAG Award for “Outstanding Performance by a Female Actor in a Drama Series.” She received her fourth Emmy nomination this year for her performance on the show, which will premiere its fifth season on Sunday, October 5, at 9 p.m. PDT on Showtime.

On the big screen, Danes starred in Richard Linklater’s critically-acclaimed film, “Me & Orson Welles”opposite Zac Efron and Christian McKay. The screenplay by Holly Gent Palmo and Vincent Palmo Jr. is based on the novel by Robert Kaplow.The National Board of Review named the film as one of 2009’s Top Independent Films.

In 2007, Danes made her Broadway debut starring in George Bernard Shaw’s “Pygmalion” opposite Jefferson Mays. Her performance as ‘Eliza Doolittle’ was well-reviewed by critics. She is also an accomplished dancer and has received critical acclaim for her performances in”Edith and Jenny and Christina Olson: American Model” both choreographed by Tamar Rogoff at P.S. 122.

Danes works with Afghan Hands, a non-profit organization that supports disadvantaged and disenfranchised women in Afghanistan gain independence, education, and livable wages. She supports their fundraising efforts and also designed a capsule collection of the scarves with her mother, Carla Danes. 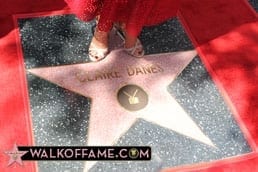