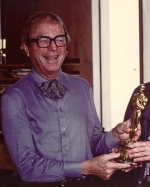 Charles Martin "Chuck" Jones was an American animator, cartoon artist, screenwriter, producer, and director of animated films, most memorably of Looney Tunes and Merrie Melodies shorts for the Warner Bros. Cartoons studio. He directed many of the classic short animated cartoons starring Bugs Bunny, Daffy Duck, the Road Runner and Wile E. Coyote, Sylvester, Pepé Le Pew and the other Warners characters, including Duck Amuck, One Froggy Evening and What's Opera, Doc? and Jones' famous "Hunting Trilogy" of Rabbit Fire, Rabbit Seasoning, and Duck! Rabbit! Duck!. After his career at Warner Bros. ended in 1962, Jones started Sib Tower 12 Productions and began producing cartoons for Metro-Goldwyn-Mayer, including a new series of Tom and Jerry shorts and the television adaptation of Dr. Seuss' How the Grinch Stole Christmas!. He later started his own studio, Chuck Jones Productions, which created several one-shot specials, and periodically worked on Looney Tunes related works.

Jones was born in Spokane, Washington on September 21, 1912. He later moved with his parents and three siblings to the Los Angeles, California area.

In his autobiography, Chuck Amuck, Jones credits his artistic bent to circumstances surrounding his father, who was an unsuccessful businessman in California in the 1920s. His father, Jones recounts, would start every new business venture by purchasing new stationery and new pencils with the company name on them. When the business failed, his father would quietly turn the huge stacks of useless stationery and pencils over to his children, requiring them to use up all the material as fast as possible. Armed with an endless supply of high-quality paper and pencils, the children drew constantly. Later, in one art school class, the professor gravely informed the students that they each had 100,000 bad drawings in them that they must first get past before they could possibly draw anything worthwhile. Jones recounted years later that this pronouncement came as a great relief to him, as he was well past the 200,000 mark, having used up all that stationery. Jones and several of his siblings went on to artistic careers.