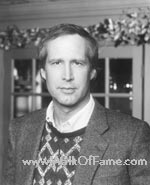 Cornelius Crane “Chevy” Chase is an American comedian, writer, and television and film actor, born into a prominent entertainment industry family. Chase worked a plethora of odd jobs before moving into comedy acting with National Lampoon. He quickly became a key cast member in the inaugural season of Saturday Night Live, where his Weekend Update skit soon became a staple of the show. Chase is also well-known for his portrayal of the character Clark Griswold in four National Lampoon’s Vacation films, and for his roles in other successful comedies such as Caddyshack, Fletch, and ¡Three Amigos!. He has hosted the Academy Awards twice, briefly had his own late-night talk show, The Chevy Chase Show, and is currently a regular on the NBC comedy series Community.

Chase was born in Lower Manhattan, New York City. His father, Edward Tinsley “Ned” Chase, was a prominent Manhattan book editor and magazine writer. His mother, Cathalene Parker, a concert pianist and librettist, was the daughter of Miles Browning, who served a critical role at the Battle of Midway in World War II; she was adopted as a child by Cornelius Vanderbilt Crane, and took the name Cathalene Crane. Chase’s maternal grandmother was an opera singer who performed several times at Carnegie Hall. Chase is a fourteenth-generation New Yorker, and was listed in the Social Register at an early age. His mother’s ancestors arrived in Manhattan starting in 1624. Among his ancestors are New York City mayors Stephanus Van Cortlandt and John Johnstone; John Morin Scott, General of the New York Militia during the American Revolution; Anne Hutchinson, dissident Puritan preacher and healer; and Mayflower passengers and signers of the Mayflower Compact, John Howland and the Pilgrim colonist leader and spiritual elder of the Plymouth Colony, William Brewster. Chase’s paternal grandfather was artist/illustrator Edward Leigh Chase, and his great-uncle was painter/teacher Frank Swift Chase.

Chase was named for his adoptive grandfather Cornelius. The name Chevy was a nickname bestowed by his grandmother, derived from the medieval English Ballad of Chevy Chase. As a descendant of the Scottish Clan Douglas, the name “Chevy” seemed appropriate to her.

Chase’s parents divorced when he was four; his father remarried into the Folgers coffee family, and his mother was remarried twice. Both his parents died in 2005. Chase has stated that he grew up in an upper middle class environment and that his maternal grandfather did not bequeath any assets to Chase’s mother when he died. Chase has made recent claims that he was abused as a child by his mother and stepfather, John Cederquist.