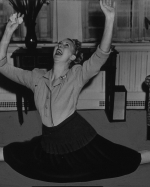 Frances Charlotte Greenwood was an American actress and dancer. Born in Philadelphia, Pennsylvania, Greenwood started in vaudeville, and eventually starred on Broadway, movies and radio. Standing around six feet tall, she was best known for her long legs and high kicks. She earned the unique praise of being, in her words, the “.only woman in the world who could kick a giraffe in the eye.” She starred with such luminaries as Betty Grable, Jimmy Durante, Eddie Cantor, Buster Keaton, and Carmen Miranda. Most of Greenwood’s best work was done on the stage, and was lauded by such critics as James Agate, Alexander Woollcott and Claudia Cassidy. One of her most successful roles was that of Juno in Cole Porter’s Out of This World in which she introduced the Porter classic “I Sleep Easier Now.”

Although the role was written with her in mind, film commitments prevented her from playing “Aunt Eller” in the Rodgers and Hammerstein Broadway hit Oklahoma. She got her chance in the 1955 film version, just prior to retiring in 1956.