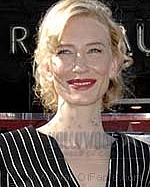 Cate Blanchett was honored with the 2,376th star on the Hollywood Walk of Fame. Leron Gubler, President and CEO of the Hollywood Chamber of Commerce, presided over the ceremony. Guests included Steven Spielberg, Kathleen Kennedy, and David Fincher.

Cate Blanchett was born on the 14th of May, 1969, in Melbourne, Australia to a Texas Navy officer and a school teacher. Blanchett attended Melbourne's Methodist Ladies College (where she became the school drama captain and appeared in various plays), and from there went on to Melbourne University to study Fine Arts and Economics. She decided to leave school to travel and to gain experience before deciding on a career. She later went on to graduate from Australia's National Institute of Dramatic Art.

Cate Blanchett has worked extensively in the theater, with Company B, a loose ensemble of actors including Geoffrey Rush, Gillian Jones and Richard Roxburgh. Her roles include: Miranda ("The Tempest"), Ophelia ("Hamlet" -for which she was nominated for a Green Room Award), Nina ("The Seagull") and Rose ("The Blind Giant is Dancing").

Her television credits include lead roles in "Bordertown" and "Heartland," both for the Australian Broadcasting Commission.

Cate's film roles include "Paradise Road," "Thank God He Met Lizzie," "Oscar and Lucinda" opposite Ralph Fiennes. This role earned her an AFI nomination for Best Actress. She went on to work in the following films: "Pushing Tin," "An Ideal Husband", "The Talented Mr. Ripley," "The Gift," "The Man Who Cried," "Bandits," "An Ideal Husband," "The Shipping News," "Lord of the Rings: Fellowship of the Ring," "Lord of the Rings: The Two Towers." Our honoree went on to win the Golden Globe for Best Actress in a Drama and a BAFTA for Best Actress in a leading role for her portrayal of Queen Elizabeth in the critically acclaimed "Elizabeth." She also received a Best Actress nomination from the Screen Actors Guild and the Academy of Motion Picture Arts & Sciences.

In 2002, Cate was also seen in the title role of "Charlotte Gray," directed by Gillian Armstrong and based on Sebastian Faulks' best-selling novel. Cate also appeared in "Heaven," opposite Giovanni Ribisi and directed by Tom Tykwer, which premiered at the Berlin Film Festival where the film was awarded the Golden Camera Award.

In 2003, Cate was seen in "Veronica Guerin." Her performance earned her a Golden Globe nomination in the category of Best Performance by an Actress in a Motion Picture – Drama and a nomination by the Washington, D.C. Area Film Critics Association for Best Actress. The film was released in October, 2003. She also starred in the Columbia Pictures' thriller, "The Missing," opposite Tommy Lee Jones for director Ron Howard. The film was released in November, 2003.

In early 2004, Cate appeared in the film "Coffee & Cigarettes". In this United Artists release, Cate played two roles – herself and the role of her cousin. Her performances earned her a Best Supporting Female nomination for the 2005 Independent Spirit Awards.

In July, 2004, Cate returned to the Sydney Theatre Company to play the title role in Andrew Upton's adaptation of "Hedda Gabler." The play was a critical success earning her the prestigious Helpmann Award for Best Female Actor in a Play. She also starred in her first Australian film in several years, "Little Fish," directed by Rowan Woods, for which she was awarded Best Actress by the Australian Film Institute.

Cate received an Academy Award for her portrayal as Katharine Hepburn in "The Aviator," directed by Martin Scorsese. She was also honored with the BAFTA Award and a SAG Award for her role in this 2004 release.

In 2006 Cate was seen in "Babel," opposite Brad Pitt. The film received a Golden Globe Award and was nominated for an Academy Award and a SAG Ensemble Award. Cate was also seen in "The Good German," costarring with George Clooney. She received a Golden Globe nomination, a SAG nomination and an Academy Award nomination for "Notes on A Scandal," opposite Judi Dench. Also in 2006, Cate and her husband, Andrew Upton, were named co-directors of the Sydney Theatre Company. Their debut season begins in 2009.

In 2007, Cate reprised her role as Queen Elizabeth in Shekhar Kapur's "Elizabeth: The Golden Age" for Universal. She was recognized with several award nominations for "Best Actress" by organizations including the Broadcast Film Critics Association, Screen Actors Guild, BAFTA and The Academy of Motion Picture Arts and Sciences. Cate is one of only five actors in the history of the Oscars to receive a nomination for portraying the same role in two different films. Also in 2007, Cate co-starred with Christian Bale, Richard Gere and Heath Ledger in Todd Haynes' "I'm Not There," for which she was awarded Best Actress at the Venice International Film Festival. Additionally, Cate received a Golden Globe Award for Best Supporting Actress, an Independent Spirit Award for Best Actress and nominations by the Broadcast Film Critics Association, British Academy of Film, the Screen Actors Guild and The Academy of Motion Picture Arts & Sciences.

Cate was seen alongside Harrison Ford and Shia LaBeouf in the fourth installment of the "Indiana Jones" franchise, directed by Steven Spielberg.