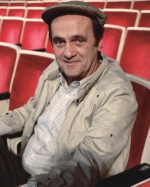 George Robert Newhart, known professionally as, Bob Newhart, is an American stand-up comedian and actor. Noted for his deadpan and slightly stammering delivery, Newhart is best known for playing psychologist Dr. Robert “Bob” Hartley on the 1970s sitcom The Bob Newhart Show and as innkeeper Dick Loudon on the 1980s sitcom Newhart.

Newhart also appeared in film roles such as Major Major in Catch-22, and Papa Elf in Elf. He provided the voice of Bernard in the Walt Disney animated films The Rescuers and The Rescuers Down Under. One of his most recent roles is the library head Judson in The Librarian.

Newhart was born in Oak Park, Illinois and raised on the west side of Chicago. His parents were Julia Pauline, a housewife of Irish descent, and George David Newhart, a part-owner of a plumbing and heating-supply business, who was Irish and German. Newhart has three sisters, Virginia, Mary Joan, and Pauline.