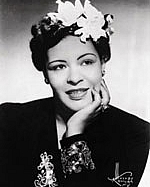 Billie Holiday was an American jazz singer and songwriter. Nicknamed "Lady Day" by her friend and musical partner Lester Young, Holiday was a seminal influence on jazz and pop singing. Her vocal style, strongly inspired by jazz instrumentalists, pioneered a new way of manipulating phrasing and tempo. Above all, she was admired worldwide for her deeply personal, intimate approach to singing.

Critic John Bush wrote that she "changed the art of American pop vocals forever". She co-wrote only a few songs, but several of them have become jazz standards, notably "God Bless the Child", "Don't Explain", "Fine and Mellow", and "Lady Sings the Blues". She also became famous for singing jazz standards including "Easy Living", "Good Morning Heartache", and "Strange Fruit".

Billie Holiday had a difficult childhood. Much information once not considered true was confirmed in the book Billie Holiday by Stuart Nicholson in 1995. Holiday's autobiography, Lady Sings the Blues, which was first published in 1956, is sketchy when it comes to details about her early life, but has been confirmed by the Nicholson research.